…a storm wind was coming from the north, a great cloud with fire flashing forth continually and a bright light around it, and in its midst something like glowing metal in the midst of the fire.

Matilda left her brother under the protection of the willow. Even though she was cold, she had taken off her shawl and tucked it around his shoulders. They hadn’t eaten since last evening meal, just before the Knights of the Dark Dragon came thundering into the village astride their painted warhorses.

Not far from the willow, she spotted a cluster of wild radishes and bent to pull them from the ground. They would be bitter, but better than no food at all. An almost-healed pox on her forearm reminded her of the horror they had left behind.

“Go,” her mother had said. “Take Jack and leave the village. You have survived the pestilence. It is God’s will.”

Her mother closed her eyes from exhaustion, but motioned her daughter to come closer. Matilda saw her own terrified reflection in her mother’s eyes when she opened them again.

“Take your father’s crown and go to the Far End. It is your only hope.”

At first Matilda didn’t understand what she meant, but then realized her mother was talking about the place spoken of in the legend of her great-uncle. He had traveled to the Far End—the place of the dragon—and was gone for many years. When he returned, her uncle carried with him a strange crown. He claimed it gave him great wisdom and, with it, he led the people of his small village into a time of prosperity. The other lords were jealous, for the dark dragons of their legend had left them nothing, and they were forever trying to capture her uncle’s prize for their own. After her uncle died, her father inherited the crown and became Lord, but now he had died from the Black Death, and those who coveted the crown had come to try and lay claim to it once again.

Matilda looked upon the crown as a family curse rather than a blessing and wished to never see it again, but she had done as her mother instructed and taken it, hands shaking, out of its hiding place. But would she have courage enough to venture to the Far End? She knew not. At that moment, she only felt an urge to take her brother and herself far from the village and the pounding hoofs of the horses and their evil riders.

Back beneath the willow, she watched as her brother ate the last of the radishes and, when he was finished, they crossed the shallow river.

Ahead lay the Far End. Here Be Dragons. That’s what was written on the maps Matilda had seen.

“Do we really have to go there, sister?” Jack asked.

“What other option is left to us? Would you rather go back to those men? Or the disease that took our family?”

They went silent for a moment.

“Do you believe the stories of our great-uncle?” Jack finally asked.

She looked ahead and did not answer him. Instead, she adjusted the strap of the heavy sack hanging from her shoulder.

“Let’s go. I would rather face this monster, benevolent or not, in full daylight than in shadow.”

The forest fell away to low shrubs and then short grasses as they neared the site. Matilda’s heart pounded as she caught a glimpse of the great beast through the foliage. It shimmered in the late morning sun.

“It must be sleeping,” Jack said.

At that moment, an oddly dressed knight came around the head of the beast. His strange armor glowed in the sunlight, like the scales of the dragon behind him.

“The man who lives inside the dragon,” Matilda said in a whisper. “So he really exists.” Her chest felt hollow when she looked upon him.

“Why must we face the dragon, Matty?” Jack whined, as he turned his back to both the dragon and the knight, and sat with arms hugging his bent knees.

“Mother said it was our only hope.”

“Hope of what? To be eaten? Or, worse, feel the dragon’s hot breath?”

“Has Mother ever told us wrong, brother? She would never put us in harm’s way.”

Matilda saw that talk of their mother had brought a tear to his eye.

“Best get it over with.”

Her heart pounded in her chest as she moved to show herself to the two strange beings—one large, brooding, and foreign, the other strangely familiar but terrifying nonetheless.

The knight turned toward the sudden noise, went down on one knee and shot a bolt of lightning from his wrist. It threw up dirt a few yards from where Matilda stood and it fell in clumps at her feet. She squealed in spite of herself and stepped back. She could hear Jack crying softly.

But then a strange sensation came over her, as if someone was watching her from inside her own body, and she was suddenly no longer afraid. She took the sack from her shoulder and, watching the knight, pulled the crown from the bottom and held it high for him to see. The knight did not move, but stayed near the sleeping dragon.

Place it on your head, something told her, and so she did.

Matilda fell back. She felt her brother’s hand on her shoulder, preventing her from stumbling to the ground.

But she could not answer him, for what she was witnessing took her breath away.

“Can’t you see it?” she finally asked.

“This,” she said, and spread her arms wide.

“I see only the dragon, the knight, and the forest.”

What kind of dark magic is this? Suddenly she was frightened, and she snatched the crown from her head.

“What did you see?” her brother pleaded.

Matilda remained silent but held her eyes on the knight for a long moment, until the same calmness she had felt before came over her once again, and then said, “We have nothing left here, Jack. Our village is destroyed and our beloved parents are dead.” She did not say it to sadden him, only to make him see the truth.

Matilda watched the knight reach his arm out to them, beckoning.

“Shall we go on a grand adventure just like our great-uncle? What say you?”

“Will we see elephants?” He wiped his nose with his sleeve.

Matilda knew he had always wanted to see those strange animals.

“Elephants and creatures you have never even heard of, my dear brother.”

Just then, the silver dragon awoke and the ground beneath their feet rumbled.

“There is nothing to fear.”

“Will we live inside the dragon, too?” He frowned in the way so familiar to her.

She pulled Jack’s hand from her skirt and together they walked toward the awakened dragon and the shining knight, with his arm still outstretched, and Matilda no longer thought of the crown as a curse.

I would like to thank James Brown for allowing me to post this short story on his website, in way of introducing my novel, The Halo Revelations. The novel is dedicated to the SETI Institute, and to all those who search for intelligent life in the universe. I’m hopeful they will succeed during my lifetime! 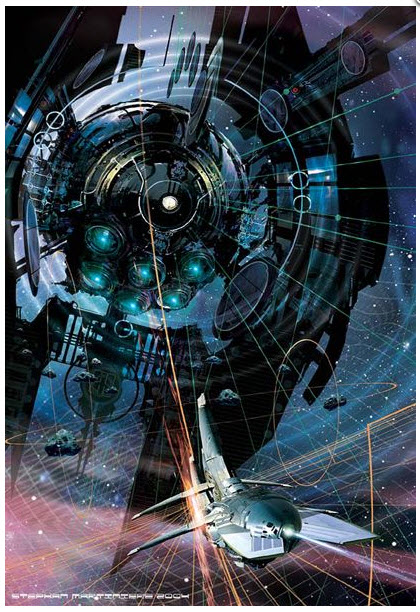