The Sky Over the Current SETI Net Station

for the Current Sky Map 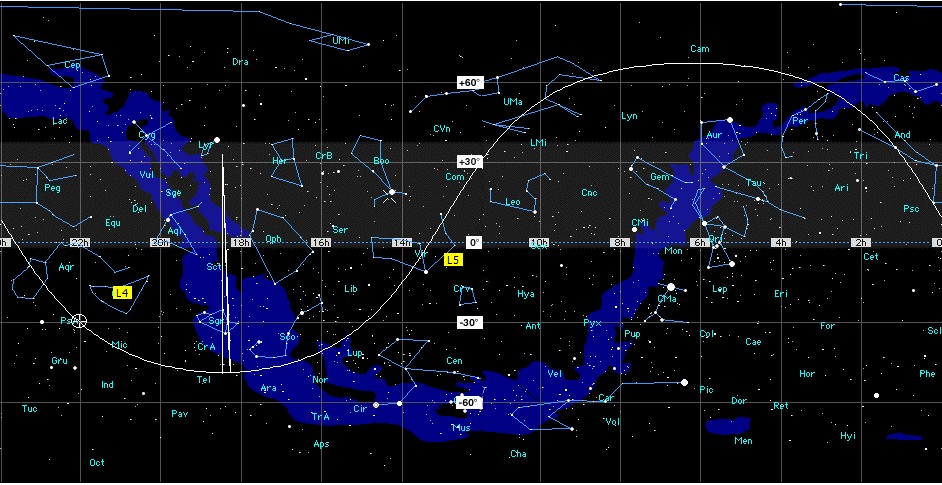 This curve represents the horizon at SETI Net. Everything above the line is visible to the station. Targets below the line cannot be pointed at.

During the day (and the night) this curve moves across the display, from right to left, showing which targets are viewable. Its shape and position are calculated by the station and displayed here in real time during operation.

To see why it is curved follow "Mercator Projection" below..

Make sure to see the latest position by refreshing your browser

The Azimuth rotor has a mechanical stop that shuts down the motor when reached from either direction.

The width of the stop shows up as a large vertical spike that moves along with the local horizon curve.

There are 89 constellations used by SETI Net. You can see the complete list here:

The white "+" sign is the current location being searched.

It is rather hard to find and will be on top of the "O" sign of the antenna when the system is tracking.

The white "O" sign is the current antenna location. It's diameter represents the Half Power Beam Width (HPBW). HPBW is calculated from the antenna size and the current receiving frequency. Normally its about 3.5 degrees.

The size of the "O" changes depending on position on the map. The HPBW stays the same but the Mercator Projection distorts the symbol.

When the antenna is locked and tracking a target the 'O' and the 'X' over lay each other and produce a bulls eye.

The Lagrange points are a special search area watched closley by SETI Net.

The two symbols do not follow the local horizon line because there locations are calculated from the position of the Sun.

You may click here to learn more about these two facinating points.

Hours of right ascension are *nearly* the same as the normal 24 hours in a day they are, however, sidereal hours.

The white boxes in the center of the map go from zero (far right) to 23 (far left) for a total of 24 hours.

Degrees of declination correspond to the up/down movement of the antenna.

DEC goes from -90 to +90 degrees as marked by the white boxes in the center of the map.

This figure is a Mercator Projection map of the heavens. A map like this is easer to calculate the various positions but it does distort the actual distances between items on the map.