Questions, Comments, death threats? eMail Me I will respond..

This section covers the dendrites

The Dendrites are the inputs to the neuron cell. They have extensive arborization and in the case of the Purkinje cells connect to hundreds of thousands of other cells. Normally they are connected to about 10,000 cells. Each connection contributes to the operation of the neuron.

If you have not done so already download and install the SETI Net Neuron Simulator here.

One of the most famous images in neurobiology.

The cell Soma, which is the largest part of the neuron, typically has a diameter of 100 uM but the diameter of the dendrite may be down to 1 uM or less. The dendrites extend 100's of microns but some can extend several meters as in the giraffe brain.

Diameters - Dendrites are thin tubes of nerve membrane. Near the soma they start with a diameter of few um and fall below 1 um as they successively branch.

A detailed multi-compartmental model of a cerebellar Purkinje cell , created with GENESIS simulator. This shows an input spike coming into the dendritic tree and spreading out as it moves down to the soma (the orange ball). The output of the soma is through a single axon - not shown

A neuron cell and its dendrite tree simplified for analysis as compartments:

These dendrite compartments can be thought of Leaky Electrical Cables with capacitance.

This picture is a view of the electrical properties of a uniform section of passive dendrite having length l and diameter d.

The ion channels are as described 1.0 The Cell. The current in and out (I axial) is defined by axial resistance to the current and the length of the compartment.

The conducting cytoplasm inside the neuron, the insulating neural membrane, and the liquid (similar to salt water) surrounding the neuron form a cable with a capacitance Cm.

The inner conductor, the cytoplasm, is a poorer conductor than the copper wire used in an undersea cable, and it has an resistance along the length of the cable Ra, the "axial resistance". The membrane in not a perfect insulator due to the ion-conducting channels that pass through it.

The various components of the cell compartment can be thought of as an electrical circuit and can be analyzed as such.

Simplest cable equation is the steady state where you can ignore the current flowing into the membrane capacitance Cm. The membrane voltage is given by (membrane current times the membrane resistance).

The quantities Rm, Ra, Cm, Vm, in the diagram and equation are given in ohms, farads, or volts, and will depend on the size of the compartment.

Specific units - In order to specify parameters that are independent of the compartment dimensions, specific units are used. For a cylindrical compartment, the membrane resistance is inversely proportional to the area of the cylinder, so we define a specific membrane resistance RM, which has units of ohms·m². The membrane capacitance is proportional to the area, so it is expressed in terms of a specific membrane capacitance CM, with units of farads/m².

For a piece of dendrite or a compartment of length l and diameter d we then have:

These results are useful for determining the length of the model compartment. Sections of dendrite that have a continuous variation of voltage along the length are replaced by a "lumped parameter model" with discrete jumps in membrane potential. By using very many short compartments, the compartmental model can approach the result of the continuous cable equation.

The membrane time constant for a short uniform section is given by:

The exponential decay of the membrane potential as the current traverses this section of leaky cable is:

Dendritic connections from other neurons may be attached to any one of thousands of places along the dendritic tree, and each connection point consists of an ion channel that restricts the flow of ions through the membrane. The configuration of each connected Ion channel determines if the junction will stimulate or retard the downstream soma from firing. If the ion channel stimulates the soma, it is called Excitatory Post Synaptic Potential (EPSP). If the connection channel depresses the downstream soma from firing it is called an Inhibitory Post Synaptic Potential (IPSP)

The type of connection (EPSP or IPSP) is set up on the simulator when defining the input to the dendrite compartment. An EPSP connection is shown by a Green connection line. An IPSP by a Red line. When several connections are made to a dendrite, the green inputs and summed and the red subtracted from the dendrites output. This then is passed down the line to eventually reach the soma.

The best way to get a feel for the interaction of the various parameters of the dendrite is to run a simulation. Download and install the SETI network Simulator if you have not already (as described in section 3. Neuron Simulator).

Start the simulator and (tbd open the Denrite simulation). 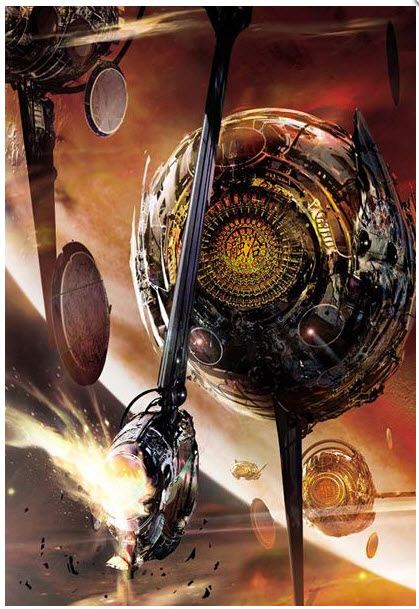